Bought on sale from Orvis, the Irish Setter Wingshoter boot: 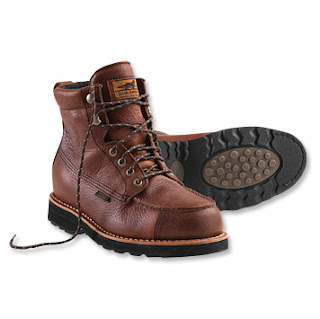 
I already had a slightly different version of this boot; one with the 'white' sole rather than black.  I found it on a clearance rack in Bass Pro Shop for less than $50.  How could I go wrong?  I soon learned that I wanted something different than the white sole for my main hunting boots when I realized they were , even 20' up in a deer stand, the most visible thing about me. They were almost fluorescent and I was certain that every animal in the valley was immediately alerted by the blinding light!

But the were comfortable from day one and remain so almost three years later. Comfortable and still waterproof.

When I saw these on sale I splurged-even on sale they weren't the obvious value the previous pair represented.  But aside from that, when there's something you like you should consider buying two. Because if you don't surely they will be discontinued or at least changed when your first wears out and you go to find it's replacement.

When they arrived I was surprised. They were decidedly different than the last pair. The leather is richer but more supple than the pair they replace. The boots had a nearly 'wet' surface reminiscent of a baseball glove in my memory from 1978-freshly coated in neatsfoot oil; ready to be broken in.

As hoped, they were as comfortable as the previous pair from the start, and although they didn't require a true break-in, I wouldn't have taken them for an afternoon bird hunt fresh from the box.

Given a good week of wear...they became my go-to.

the obvious is that they aren't made in America. Woe...the geo-politics of manufacturing....

Whenever possible I try to find a home-grown product; even when it costs a bit more. The quality in these boots, however, is better than what I'm used to from far either eastern import or domestic production.

All in all-maybe I should get another pair before they change or discontinue them!